Yesterday, June 27, notorious slumlord Sanford Capital was back in court for attempting to slither out of a court order mandating he negotiate directly with Congress Heights tenants or face over $2 million in repairs to the properties.

The tenant-led fight against slum conditions, displacement and gentrification has been documented in detail by various media outlets over the last five years, including the Washington City Paper as well as the Washington Post. The shocking conditions at Congress Heights garnered the attention of Attorney General Karl Racine, who in September 2017 announced that a court had appointed a receiver to manage the property. 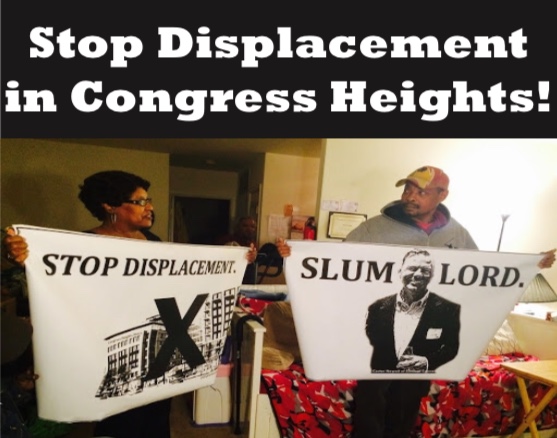 In November 2017, D.C. Superior Court Judge John M. Mott, ordered that Sanford Capital negotiate exclusively with the Congress Heights tenants, or pay millions in repairs to make the properties habitable and safe for tenants. Within that 60 day period, on December 27, 2017, Sanford Capital, with the help of Ben Soto of Eagle Bank, transferred the properties via a "deed in lieu" to their long-time business partner Geoff Griffis of City Partners, thereby violating the court order, and circumventing the tenants TOPA rights.

At yesterday's court hearing Judge Mott heard evidence on two major issues: 1) Whether the transfer of properties from Sanford Capital to Geoff Griffis/City Partners violated a court order in place at the time of the transfer, and 2) Whether the court-appointed receiver's plan to totally rehabilitate the property will be ordered, whereby Sanford Capital and/or City Partners would have to pay out over $2 million dollars to make the properties livable, or re-engage tenants in a negotiation to sell the properties to the tenants through their chosen non-profit developer, who would build 200 units of quality affordable housing.

Judge Mott heard from attorneys representing Sanford Capital, City Partners, as well as Assistant Deputy Attorney Jimmy Rock from the Public Advocacy Division of the D.C. Attorney General’s office. During the course of the proceedings, City Partners and Sanford Capital turned on each other, each claiming that the other should be liable for any court-ordered payment related to the receivership.

Assistant Deputy Attorney Rock argued with demonstrable evidence that Sanford Capital and City Partners had acted in concert when they engaged in the transfer of properties, and additionally negotiated a side deal that rendered the transaction not a "deed in lieu," but rather a sale, disguised as a "deed in lieu." Rock explained that the evidence presented clearly satisfies the legal requirement for civil contempt of both Sanford Capital and City Partners, including due to their prior knowledge of the court order that was in place when they engaged in the transaction.

In the coming weeks, Judge Mott will issue a ruling on these issues. In the meantime, check out this recent report: Why D.C. Government Favors Luxury Condos Over Affordable Housing in Congress Heights.