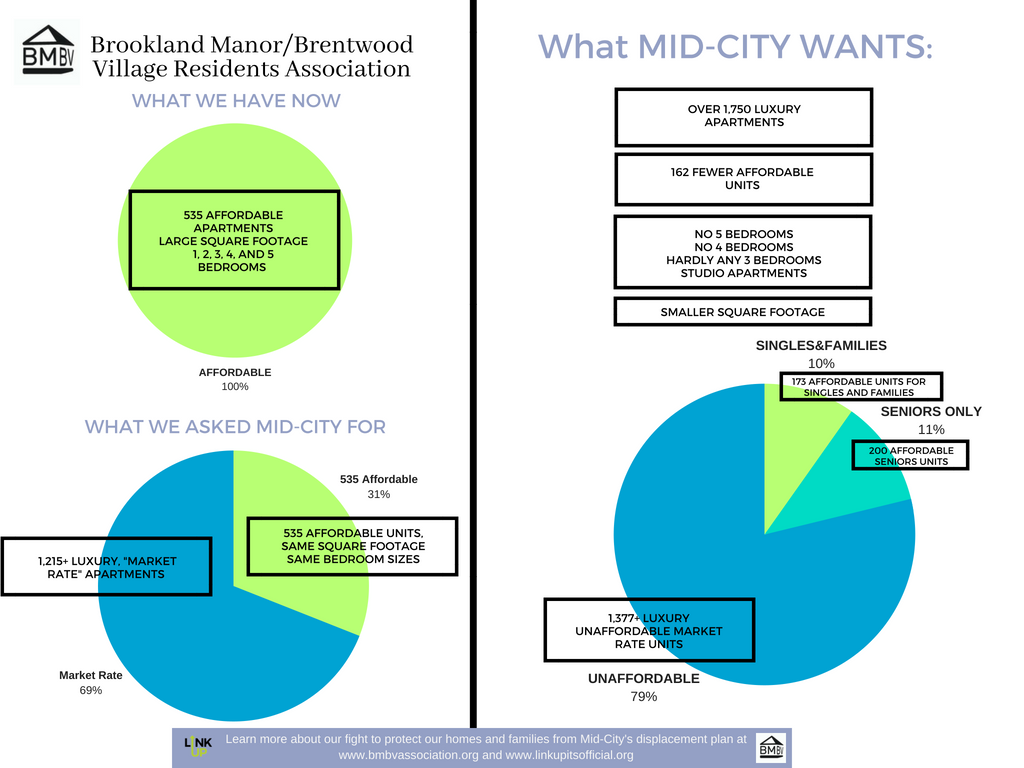 LinkUp has released a graphic with the Brookland Manor/Brentwood Village Residents Association depicting the numbers associated with the proposed redevelopment plan at Brookland Manor, better described as a displacement plan and effort to advance gentrification in the Rhode Island Avenue N.E. area of Washington, D.C.

Disturbingly, Mid-City continues to promote the false narrative that their redevelopment plan is actually positive for affordable housing, and that no one will be displaced. The actual numbers and facts in the graphic below clearly show otherwise. A comprehensive summary released back in May of this year by the Washington Legal Clinic for the Homeless (WLCH) reveals the most recent D.C. Zoning Commission order on Brookland Manor, which sanctions displacement. The WLCH summary of key takeaways reads:

• The order indicates that Mid-City Financial Corp. “does not have an obligation to ensure that future rents in the redeveloped property meet the Section 8 payment standard.” As we referenced earlier, this means that households that currently live at Brookland Manor and are able to afford rent with the help of a housing voucher, might be unable to remain in their community after the redevelopment.

• The order indicates that through the zoning process, Mid-City Financial Corp. does not have a legal obligation to build housing for families that require larger units with more bedrooms.

The Zoning Decision is currently being appealed by president of the Brookland Manor/Brentwood Village Residents Association, Minnie Elliott, on behalf of the Association membership and the affordable housing interests of the entire community. In the coming weeks and months, the Residents Association at Brookland Manor will call on the public to continue to stand in solidarity and in support of their organizing campaign at upcoming events and actions in defense of the working class Black community targeted by developers like Mid-City and their political supporters, including Ward 5 council member Kenyan McDuffie.