Today's newsletter features an article by 23-year-old Washingtonian Breyuanna Campbell, in which she shares her perspective and direct experience with homelessness in the nation's capital. We also follow up on last week's exposure of the shocking neglect of public housing units and residents, including children, who continue to be subjected to slum conditions at Montana Terrace in Ward 5 of Northeast Washington, D.C.

Justice First's aim with this newsletter is to expose this highly organized economic and political order that systematically puts the profit interests of private corporations over the human needs of the people. The D.C. housing struggles below exemplify the blatant corruption, collusion and fundamental inequity of a system organized around money rather than around people.

Voices of the Youth: Breyuanna Campbell

I remember looking through the express papers, checking out rental prices for one and two bedroom apartments. I just knew that one day I would have my own place. Then, gentrification happened. It seemed like everything happened overnight. One day the city was affordable, the next day there were luxury condos all up and down H Street. With the developers working to increase their profits and attract wealthier populations rent prices have increased, making it hard for the average working D.C. resident to afford even a one bedroom. Even with the minimum wage increases, I still wouldn’t be able to afford my own apartment. 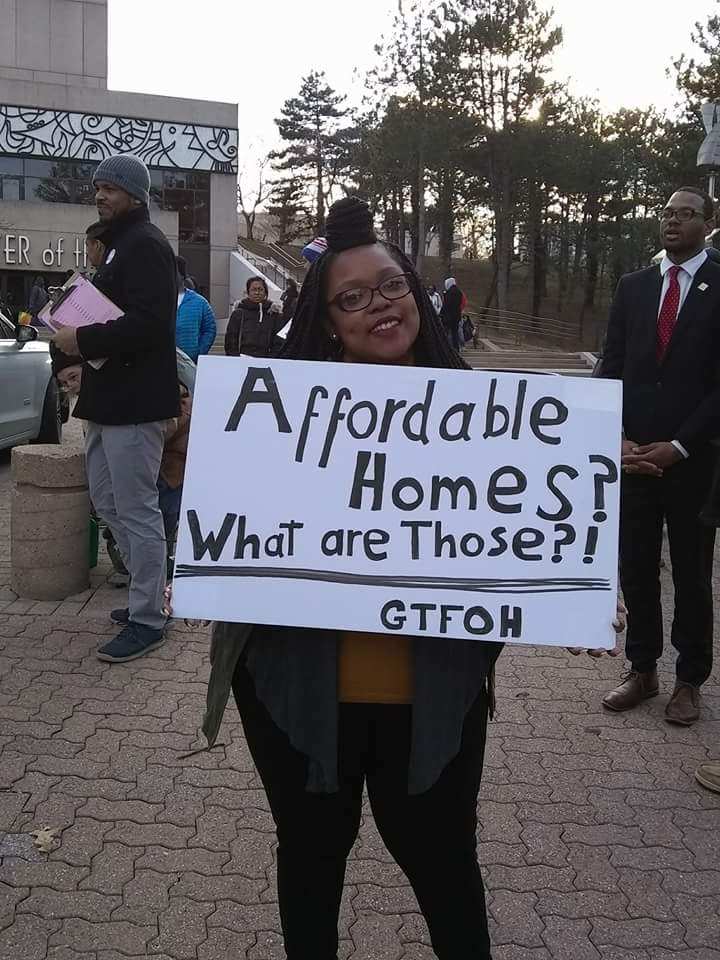 Being a native Washingtonian, you would think it would be easy for me - someone who has been here since birth - to be able to afford my own place. Unfortunately, with rising rents and luxury redevelopment plans rubber stamped by the D.C. Zoning Commission, D.C. residents and their families are being displaced from their homes. The resources of working people are limited and becoming more limited, while the cost of living continues to rise. When I left my Grandmother’s house back in 2015, I was 20 years old and had nothing but a few outfits and the clothes on my back. At the time all of the shelters in D.C. were full, leaving me to sleep in an abandoned house on 6th street, Northwest. From the abandoned house, to the 3rd street tunnel, to Nativity Women’s shelter, to Casa Ruby’s transitional living program. All of this while trying to maintain employment and pursue my college education. Day to day, I spent most of my time figuring out my next move. I think that was my motivation, focusing on what’s next. At times bouncing from place to place became stressful. Some days I wondered was it really worth it. On top of that, some of the programs that D.C. has set up for the homeless community are not properly operated. People would talk to us any kind of way. “You don’t have to be here, this is a shelter!” It was bad enough that I was going through a tough situation. The last thing I need is someone making me feel unwelcome.

It can be hard, especially on the younger generation. Since we are the “Future Leaders,” a lot of weight is being held over our shoulders. With the rents continually rising, who knows how much rent will be in D.C by the year 2020. So, what does that mean for the average young person living in D.C.? The average price for a one bedroom apartment in D.C ranges from $974-$1,998, a huge increase from the early 2000s. Youth will be forced to work 2-3 jobs just to afford a one bedroom apartment. This gives us no time to save for our future, because we have to spend all our money on housing. It also makes it hard for us to focus on other things such as education and family.

I believe this system is not designed to help the average person in America. The negative effect and damage comes from all sides - the justice system, the education system and the economic system all fail us. The economic system in place that is supposed to help families live out their true potential has clearly failed by letting developers take over major cities through gentrification projects that will make them money. Gentrification tears families apart, making it hard for parents to take care of their children because they have to pick up extra jobs just to afford housing. Children are being forced to stay home from school to watch younger siblings, leaving them with unexcused absences from school, which also hinders their education. These are things that I have experienced and witnessed as a young person in America. The government in America makes a lot of demands from its citizens. However, when will the government meet the demands and needs of its citizens who fund it through our tax dollars?

When I first experienced homelessness, I remember feeling so lost, I didn’t know what to do. I definitely didn’t know what to expect. I am now 23 years old. Three years after I became homeless, I was able find temporary housing on campus at Trinity University, where I attend college. I am still looking for permanent housing, and I know when my schooling is complete, this will be a difficult task. In the meantime, I have become active in making a change, not only for myself, but for those around me, too. I was introduced to the Washington Legal Clinic for the Homeless, an organization that works to protect the rights of homeless citizens. Within that organization the group PPA (People Power Action) was formed and I became a member. The purpose of the group is to provide advocacy for people and families facing housing difficulties, to end displacement and predatory redevelopment plans, and also to create unity by having individuals come together sharing similar struggles. I am also an active volunteer with the Brookland Manor/Brentwood Village Residents Association and I show up to demonstrate my solidarity with tenants around D.C. who are fighting displacement.

Often, people with fewer resources, which includes many native Washingtonians, can be made to feel inferior compared to the new residents and wealth that has moved to D.C. We should not let anyone, regardless of race, money or power, take over our city and leave nothing for the working class. We have just as much power as they do, however, we need to stick together. Unity is the key to success. No one person can do it by themselves. In order to stop the housing crisis, D.C. residents should take a stand. We can no longer sit back and watch changes happen that don’t benefit residents as a whole. It’s time for Washingtonians all over to take a stand, as we fight for housing as a human right!

Last week, we interviewed two public housing residents in Washington, D.C.: Yahvon Early and Gretchen Helm. The interviews revealed the dangerous, unsafe and slum-like conditions that they and their children continue to be subjected to as a result of the city's neglect and outright disregard of Montana Terrace, as with many other public housing properties across the city. Each week, we will provide an update of the status of Ms. Early and Ms. Helm, so as to demonstrate the processes that tenants have to go through in order to get urgent conditions addressed, due to inefficient existing systems that force public housing residents to endure unsafe living conditions, sometimes for years on end, despite many dozens of work orders submitted. 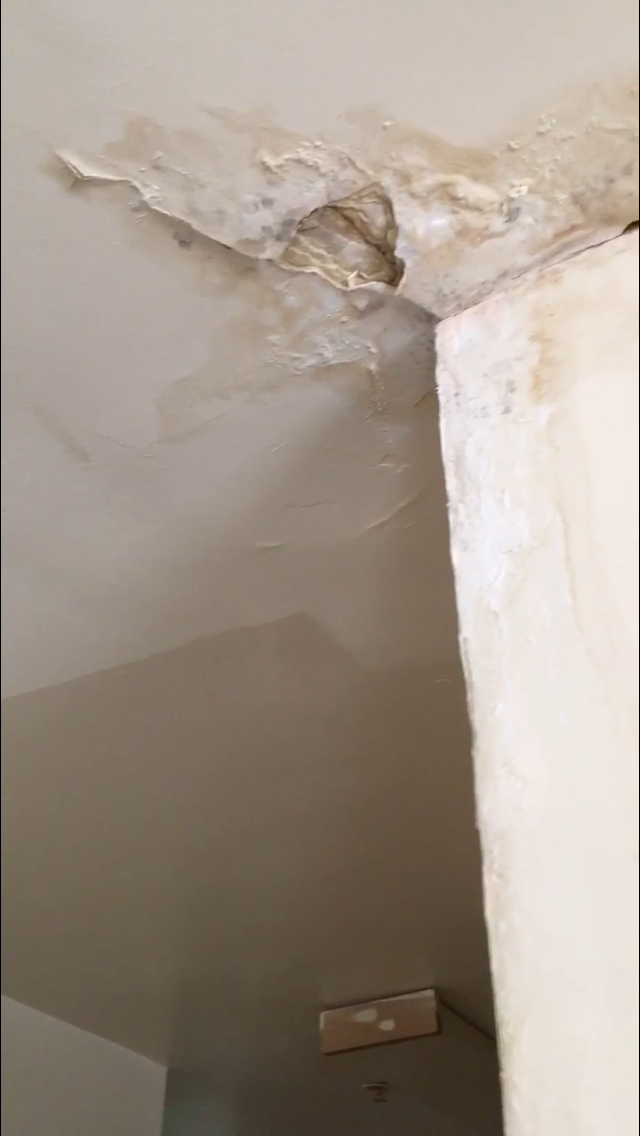 Photo: Inside of Yahvon Early's Unit at Montana Terrace, where a leak that led to a massive hole in the room over her daughter's ceiling, has spread to her living room.

Update - Yahvon Early
The D.C. Housing Authority indicated on two separate occasions, June 21 and June 28, that it would follow up with Yahvon Early. On June 29, after living with a huge, gaping hole in her ceiling for about two weeks, Ms. Early finally received a visit from the property manager and her supervisor, as well as a third representative from the Housing Authority who assessed the damages, and informed her that they would need tear out the apartment and put her in a hotel for the duration of that process. They also assured her that they would get the mold assessed. They informed Ms. Early that the arrangements would be finalized on Monday, July 2. As of Friday, July 6, Ms. Early has heard nothing. Council member Kenyan McDuffie's office was informed by social media on Friday, June 29, at which point his staff requested an email. An email was sent to Kelley Cislo and Council Member Kenyan McDuffie on Monday, July 2, with a response and acknowledgment from their office received Friday, July 6. Two additional representatives from the D.C. Housing Authority also responded and stated that they would "look into the concerns raised and will be in touch with the residents to determine next steps." Ms. Early has received no information so far on next steps.

Update - Gretchen Helm
On Monday, July 2, three days after Justice First released Gretchen Helm's interview, the D.C. Housing Authority visited Ms. Helm's unit with a mold inspector. Neither the Housing Authority representative nor the mold inspector gave Ms. Helm any indication of when the results would be in, or when they would proceed with addressing the health and safety hazards inside her unit as a result of mold and rodent infestations. Council member Kenyan McDuffie's office was informed by social media on Friday, June 29, at which point his staff requested an email. An email was sent to Kelley Cislo and Council Member Kenyan McDuffie on Monday, July 2, with a response and acknowledgment from their office received Friday, July 6. Two additional representatives from the D.C. Housing Authority also responded and stated that they would "look into the concerns raised and will be in touch with the residents to determine next steps." Ms. Helm has received no information so far on next steps.

In Washington, D.C. where we have $2.4 billion in reserves - a city with too much money - its own Housing Authority is given the green light to neglect public housing, even while residents across the city are poisoned by biotoxins and robbed of their ability to have a decent quality of life. The D.C. Housing Authority is slow to act, if at all. In fact, as made clear by both Yahvon Early and Gretchen Helm's cases, residents might go for years and even decades living in abhorrent conditions so long as they fall under the radar. At Justice First we maintain that there is no reason whatsoever that we cannot have state-of-the art, well maintained public housing. We must continue to organize and demand a system that prioritizes our basic human needs, one of which is housing, for the protection of youth, families and all people.

Watch the video interviews released last week with Yahvon Early and Gretchen Helm, and share the link to them on the Justice First website