7/27/18 Newsletter: In the Nation's Capital, A Housing Crisis by Design 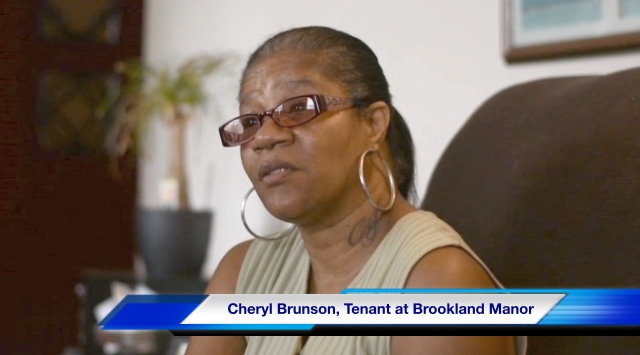 In this week's newsletter, we highlight D.C.'s deficient shelter system, the ongoing attacks on the health, safety, and security of public housing residents at Montana Terrace, and a LinkUp interview with Cheryl Brunson, tenant at Brookland Manor, the site of one of the largest proposed redevelopments in Washington, D.C., where a high profile housing fight has exposed the racist and predatory policies of developer Mid-City Financial.

Justice First Analysis: Homelessness is a Product of Capitalism

In the Nation's Capital, according to a 2018 Point-in-Time count, about 6,904 people, including 924 families with almost 2,000 children are experiencing homelessness. According to the same report, over 30% of homeless adults are employed. The fact that many homeless adults are employed, yet unable to afford housing, is demonstrative of the obvious fact that homelessness is a product of capitalism, an economic system in which the drive for profit facilitates the extraction of resources from workers at a rate that makes it impossible to keep up with the basic cost of living.

The cost of shelter for families in D.C. ranges from $92.70 per unit, per night at the lowest end, to $134 per unit, per night at the highest end, according to information retrieved from a Department of Human Services budget oversight hearing. The District government for years has paid out many millions to house families in a derelict, makeshift shelter system, with nightly housing costs for families that don't even account for the cost of all maintenance and facility costs, security and monitoring costs, or the costs associated with maintenance and rehabilitation of apartments.

If the economic system is organized such that living wages are not guaranteed, it stands to reason that the government, with the money they generate from our tax dollars, must accommodate for the PERMANENT affordable housing needs of every person in D.C., as a basic human right. It is an enigma that those in charge of the city budget, made available by taxpayer money, are unable to formulate a plan to provide permanent, affordable housing for all. 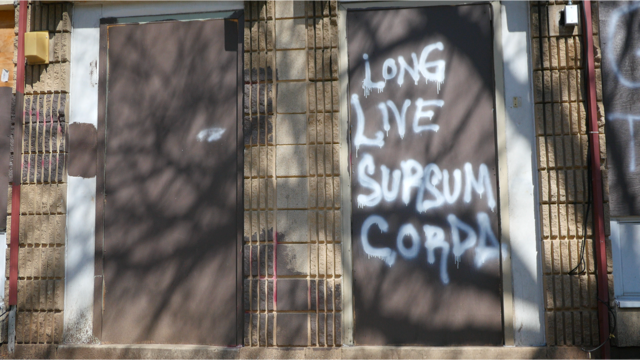 Photograph of boarded up units in the Sersum Corda neighborhood, slated by for redevelopment. Photo credit: Francis Tatem

Many hundreds of families experiencing homelessness have been forced over the years to seek shelter at "D.C. General," an abandoned, derelict hospital that sits next door to the D.C. jail, and has a capacity of approximately 270 families. The remaining homeless families are either in the streets, or placed in "overflow capacity units/motels" and "temporary shelters." Most recently, in 2016, Mayor Muriel Bowser announced that D.C. General would be shut down, and replaced by smaller shelters throughout the city, in a plan that has been plagued by incompetence and delays.

Despite delays in construction of replacement shelters, the Mayor has no plans to delay the demolition of buildings at the D.C. General campus, set to begin next Wednesday, August 1st, unbothered by the fact that at recent count, over 100 families will continue to live there through the end of September. The Washington Legal Clinic for the Homeless has led a petition drive and documented the circumstances surrounding failed legislation, watered down to inconsequential legislation, introduced by Ward 8 council member Trayon White and passed unanimously by D.C. city council last week. Neurotoxins are expected to be released into the air as demolition moves forward, which may have severe consequences on the health and safety not only of families that remain at D.C. General, but also of those housed in D.C. jail, next door to D.C. General.

Meanwhile, the District's Housing Production Trust Fund, consisting of over $100 million intended to cover costs related to building affordable housing, has become a slush fund for developers, many of whom have failed to pay back loans. Additionally, the city failed to use 40% of the funds for households earning less than 30% of the Area Median Income, as required by law. A recent audit shows that the Department of Housing and Community Development (DHCD) actually used money from the Housing Production Trust Fund to pay for several pieces of of fitness equipment for its gym. The continued mismanagement of public money can be better characterized as a management policy that is designed to meet the profit interests of developers, at the expense of the needs of working people. Despite a litany of excuses offered by Mayor Bowser and elected officials that purport to represent the interests of D.C. residents, there is no logical excuse for why a city with too much money cannot move forward immediately to eradicate homelessness and solve the affordable housing crisis.

While city agencies brazenly use money set aside for affordable housing to add pieces of equipment to their gyms, tenants living in public housing throughout the District continue to be subjected to constant housing inspections while forced into living arrangements where families are plagued by chronic infestations of multiple sorts, and continued exposure to dangerous toxins.

Justice First will continue to feature a weekly update on the living conditions of two families at Montana Terrace, a public housing property in Northeast Washington, D.C., managed by the D.C. Housing Authority. We are entering our fifth week of reporting on Montana Terrace, which began with interviews that exposed deliberate neglect by the Housing Authority. The purpose of our weekly reports on the status of the families of Yahvon Early and Gretchen Helm, is to demonstrate to the public the absurdity of a system that requires constant follow up to demand, and in many cases beg the city to protect its own residents from safety hazards caused by its own agencies. 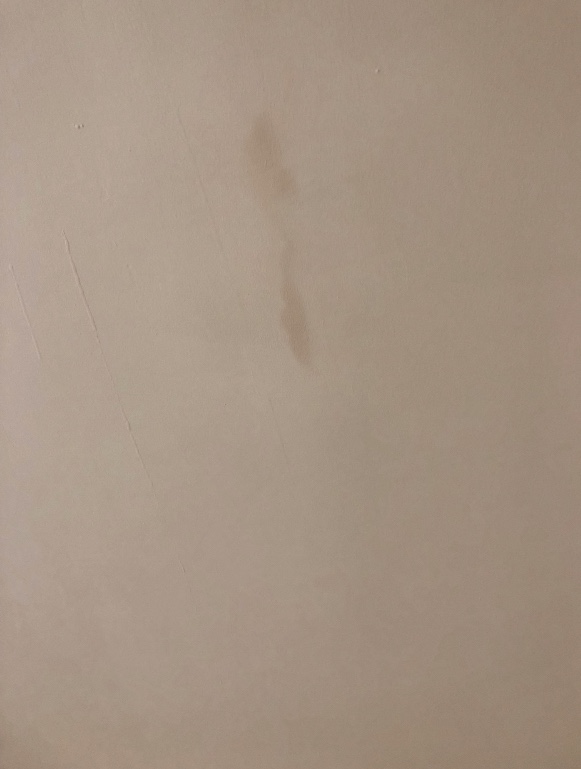 Damp spot emerges in the same area of a ceiling that had previously collapsed from a water leakage at Yahvon Early's public housing unit at Montana Terrace, just two days after repairs were made. Photo credit: Yahvon Early.

Yahvon Early and her daughter, were moved back to Montana Terrace on Wednesday, July 25, after being housed temporarily in a hotel on New York Avenue in Northeast Washington, D.C., while their public housing unit was rehabilitated by the D.C. Housing Authority. Ms. Early has reported that the unit is nicely painted, and the extensive water damage that previously marked ceilings and walls throughout her living room and kitchen is gone. Though the collapsed ceiling in her daughter's bedroom has been repaired, unfortunately, it appears that another leak is in its early stages in the same area of the ceiling, where today, Ms. Early photographed a damp spot. Additionally, the smell of mildew remains present throughout the unit. While Ms. Early and her daughter are relieved that the unit has been rendered significantly more habitable than before, they are concerned that once again, they will be plagued by the same problems they have faced for the past 10 years in this same unit at Montana Terrace. Additionally, they are seriously concerned about the adverse health effects of toxins that they have been exposed to throughout their time in public housing, as well as, the city's continued refusal to release the results of a mold inspection ordered by the Housing Authority and conducted by a certified mold inspector back in early July. Continued follow up is planned with the Housing Authority and local city council member Kenyan McDuffie, to retrieve the results of the mold inspection, which Ms. Early and her daughter have a fundamental right to examine. 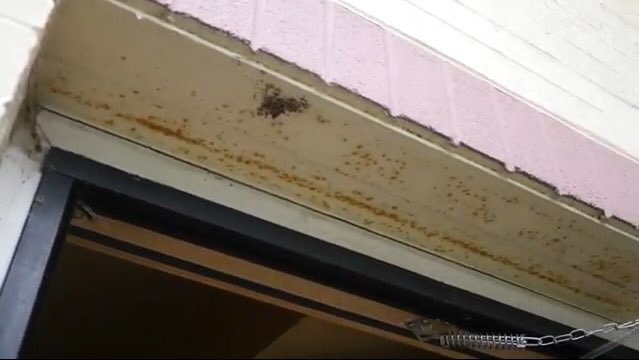 Mold is immediately visible in the doorway of Gretchen Helm's public housing unit at Montana Terrace in Northeast Washington, D.C. She and her young children have been exposed to toxic mold in their home on a daily basis over a period of many years. Photo credit: Francis Tatem.

Disturbingly, the day after Gretchen Helm and Yahvon Early were featured on the July 17, 2018 segment of "Taking Action," a "housekeeping inspection" notice was delivered to Ms. Helm, along with a delinquent rent notice. Yesterday, Thursday, July 26, two Housing Authority representatives arrived at Ms. Helm's residence to inspect her unit, which was as clean as possible, barring what we can characterize as the Housing Authority's failed housekeeping, including rampant mold and rodent infestation. Last week, we reported that Ms. Helm was subjected to another inspection for which she received no notice, nor was she given any information on the purpose of the inspection.

The treatment Ms. Helm is receiving from the Housing Authority, which has failed to provide the results of the mold inspection conducted on her unit, and continually failed to address slum conditions, can only be described as heinous disregard for the health and safety of Ms. Helm and her young children. At yesterday's "housekeeping inspection," Ms. Helm was told that a few work orders would be called in, and that she would be sent another notice so that the work can be completed throughout the course of a day. When this day will be, or what specific conditions will be addressed by these work orders, remain to be seen. 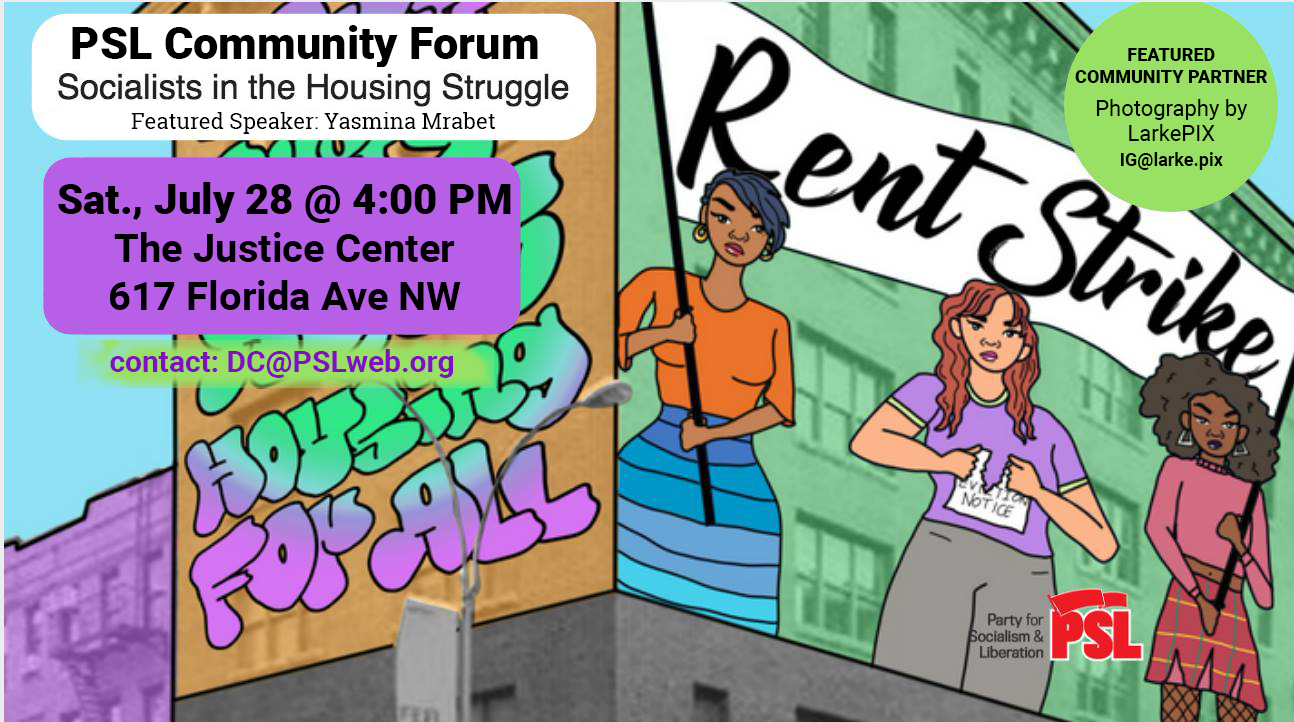 Socialists in the Housing Struggle

This Saturday, July 27, an event hosted by the Party for Socialism and Liberation at the Justice Center, 617 Florida Ave NW, will feature a talk exposing the contradictions of the capitalist approach to housing and development, which, both as a policy and an outcome, promotes mass displacement and gentrification.

The discussion will additionally focus on envisioning a new program to solve the affordable housing crisis in its entirety. We encourage our supporters in the D.C. area to attend and participate in this important discussion.

Last week, we featured a LinkUp interview with Marianna Richardson, Cheryl Brunson's 10 year old grand daughter, who has lived at Brookland Manor in Northeast Washington, D.C., all of her life. This week, Ms. Brunson, who serves as treasurer of the Brookland Manor/Brentwood Village Residents Association, discusses the predatory redevelopment process being carried out by Mid-City Financial, the disregard of Ward 5 council member Kenyan McDuffie to the affordable housing needs of his own constituents, and the impact of the redevelopment on children in the community.