Priorities of Capitalism in D.C.: White Supremacy and Racist Displacement 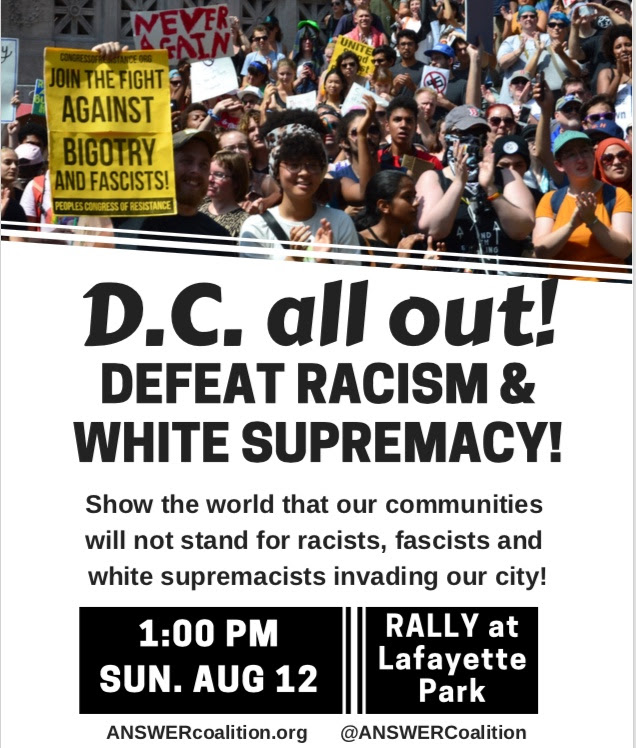 The priorities of capitalism continue to be highlighted in the nation's capital, where a fascist group, "Unite the Right," plans to rally in front of the White House on Sunday, August 12.

Most recently, city council member and Chairman of the Washington Metro Area Transit Authority (WMATA) Board of Directors, Jack Evans (D-Ward 2), suggested that running a separate train for the Nazis and Klansmen was an option under consideration - an option that would provide special accommodations for white supremacists planning to spread their messages of hate on the one year anniversary of the murder of Heather Heyer in Charlottesville, Virginia. The largest metro workers union, the Amalgamated Transit Union (ATU) Local 689 opposed and effectively shut down the plan to provide private trains for the hate group.

Justice First endorses the planned and permitted ANSWER Coalition counter-demonstration to take place on Sunday, August 12, 1:00 p.m. at Lafayette Park. We support a message that makes clear that the KKK and fascism have no place in Washington, D.C., or anywhere. We encourage our supporters to join us this Sunday to drown out the fascist message of hate and division. We will amplify the true sentiments of the vast majority of people in the United States, which favor a just system that encompasses all nationalities and meets the human needs of all people.

The priorities of capitalism in D.C. are not only highlighted by the example above, but also by the so-called "New Communities Initiative," a plan to privatize the city's public housing stock. In one of many statements from the Mayor's office, the plan purports itself to be a "District effort to revitalize Washington, DC’s most underserved neighborhoods and ensure that residents are able to stay in their neighborhoods while enjoying a high quality of life." Strangely, according to a report published by the D.C. Fiscal Policy Institute, the New Communities Initiative seeks to build fewer than 2,000 new affordable units, despite that fact that over 6,500 public housing units are in need of serious repairs, over 40,000 families are on a waiting list for vouchers, and last year, the city managed to forfeit $15.8 million in affordable housing money.

The plan to eliminate huge swaths of the dwindling affordable housing stock in the District through the privatization of public housing is effectively a plan to displace the working poor and to continue the long-established trend of gentrification in the city. The affordable housing crisis is further evidenced by the stances of city agencies and officials towards luxury redevelopment plans in communities like Congress Heights and Brookland Manor.